June 23, 2016 was a day that will forever leave a lasting impression on me. I was fortunate enough to be asked to document the Independence Varsity football team and their day with the Navy SEALS. The classroom presentation was concise and easy to follow.

(Written by Dorma Tabisz, Guest Writer and Photographer and Grandmother to Ryan and Reid Smith!) 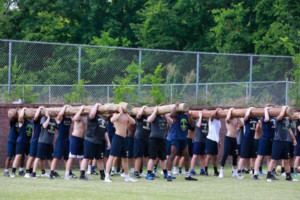 The recurring theme was, “It pays to be a winner!” The challenge is how one becomes a winner. Finding a way to win begins with commitment. Jason, one of the SEALS, stated that there is a difference between desire and discipline. Do you desire to win or are you disciplined enough to find a way to win? Finding a way to win is a hard lifestyle but one that is incredibly rewarding. Commitment means doing what we don’t want to do when we don’t want to do it. One must show up on time and put your all out effort for your team. The team was asked, “What is this worth to you?” It is worth ignoring distractions?

Ignoring distractions means focusing on what you are doing right now. Prepare. Preparation builds trust and trust builds confidence. As a player you should be able to say, “I’ve done everything I can to prepare for this game.”

The team was instructed to: 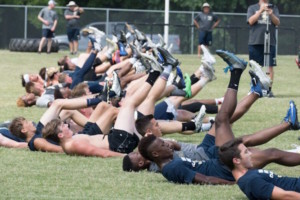 During the four hours in the hot sun with no shade, the boys ran everywhere they went…from the locker room to the practice field…from the completion of a task to the water on the opposite side of the field. They inspired one another through it all. They repeated and completed the commands above.